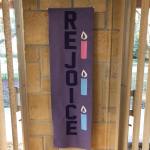 Today, the third Sunday of Advent, is sometimes known as “Gaudete Sunday.” “Gaudete” is the Latin word for “rejoice,” and has for generations appeared as the first word of the introit of the Latin mass for the day. The appointed lectionary texts for the day tend to reflect that imperative call to “rejoice,” and the procession of purple candles in the Advent wreath is interrupted on this day by a pink candle, suggestive of a slight lift in an otherwise penitential or at least reflective season.

You can hear the rejoicing in at least two of the texts we have heard this morning. Leave it to John the Baptizer, out in the wilderness, to be the exception. You’re not going to look for a call to rejoice in a text that starts with John calling some of his hearers “You brood of vipers!”. Rejoicing isn’t John’s thing; straight-up call to repentance and change of life is his work and he doesn’t let up in the face of anything. The two outer portions of this passage feature John at his harshest. Besides the “brood of vipers” invective in part one, he swats down the “children of Abraham” privilege defense his hearers were likely to claim before they even had a chance to claim it, with the pithy observation that God could raise up “children of Abraham” out of the stones on the ground. Then he conjures up the image of an axe ready to cut down trees that don’t bear fruit. The third part invokes separating wheat and chaff, with the latter consigned to fire.

The middle section might not rise to the level of rejoicing, but it at least contains good instruction to those who would hear. It’s also specific instruction; what the tax collectors were challenged to do was not the same thing as what soldiers were challenged to do. In each case, they were called out for the abuses associated with their profession and told to stop it. For all, the challenge was most basic: share with those who don’t have. Notice that John isn’t telling everyone to give everything away; keep one coat for yourself but give one to the person who doesn’t have one. Not quite rejoicing, but solid instruction to build upon, and potentially a source of joy in the doing.

The snippet from Paul’s letter to the Philippians, on the other hand, puts the “rejoice” imperative right up front. Notice, though, that this isn’t written as a part of some enthusiastic outburst of praise. No; the way the passage is structured, the call to “rejoice” is but one instruction among many. Paul follows by telling his readers to be gentle, know that the Lord is near, don’t worry about stuff, but pray and make your requests to God with gratitude. The quick sequence of instructions is wrapped up with a promise, and a beautiful one at that: “And the peace of God, which surpasses all understanding, will guard your hears and your minds in Christ Jesus.”

For the real outburst of rejoicing on this Gaudete Sunday, you have to go to that reading from Zephaniah, another one of those short prophetic writings from the tail end of the Hebrew Scripture we find in our Bibles. What we have here is the end of that book, and what a passage it is! Amidst all the calls to sing and shout and rejoice comes the word that “The Lord, the King of Israel, is in your midst” in verse 15, and “The Lord, your God, is in your midst” in verse 17. And look at the promises in this finale;

It is big, it is bold, it is exuberant – the whole image that God “will exult over you with loud singing as on a day of festival” in verses 17-18 is just wonderful to contemplate. It is a beautiful and exuberant song of rejoicing that is so utterly and completely out of place in the context of the rest of this book.

As short as Zephaniah is, I don’t think I have time to read the entire book here in the sermon. So to give you an idea, here are a few choice moments from the book. Take the very first chapter. Verse one is an introductory statement, and then come verses 2-6:

How about verses 17-18 from that same chapter:

I will bring such distress upon people that they shall walk like the blind;because they have sinned against the Lord, their blood shall be poured out like dust, and their flesh like dung. Neither their silver nor their gold will be able to save them on the day of the Lord’s wrath; in the fire of his passion the whole earth shall be consumed; for a full, a terrible end he will make of all the inhabitants of the earth.

Chapter 2 directs the same kind of thing against Israel’s enemies, and chapter 3 turns the focus back to Jerusalem before the lift at the end of the chapter. But hopefully you get the idea. You can see, hopefully, just how jolting that song of rejoicing at the end is in the context of all that has come before. It’s jolting enough that some scholars are convinced that 3:14-20 was not original to Zephaniah but added by a later editor.

Part of the uncertainty has to do with whether Zephaniah was written while Israel was still in exile in Babylon, or after they had returned to the the barren and broken-down land of Israel. Either way, neither is a situation that suggests rejoicing. In the one, you can only dream of home from far away; in the other, you can only dream of home even though you are home.

And yet, whichever bleak and seemingly hopeless situation the people were in, the song is of rejoicing. The rejoicing doesn’t wait; rejoicing trusts in the promises of God, the goodness of God, the love of God, the nature of God, and takes assurance that the deliverance of God will come.

It’s not unrelated to why this particular Sunday, “Gaudete Sunday,” happens now, before we get to the end of Advent. I forget who it was that asked me, a couple of years ago when we first began to use these banners in worship for Advent, why the “rejoice” banner came before the “behold” banner that will be placed next Sunday. It turns out our rejoicing isn’t based on seeing; rejoicing comes by faith. It comes by trust. It comes from dwelling in God and knowing God’s promises for us, God’s love for us

I don’t quite think our situation is quite so bleak and desperate as the one in which Zephaniah’s original hearers lived, whether they were in exile or returned from it. It ain’t great, though. And yet the exaltation to rejoice, the invitation to rejoice, even the command to rejoice isn’t nullified by any adverse circumstances. We rejoice in God not because of any one thing we see, but because of who God is: a God faithful and just to forgive us our sins, a God who love us enough to rejoice over us with loud singing, a God who fulfills promises, a God who delivers. In the goodness and faithfulness of God, the God who shows us the Promised One coming, we rejoice. And not just on Gaudete Sunday.

For a God in whom to rejoice, Thanks be to God. Amen.